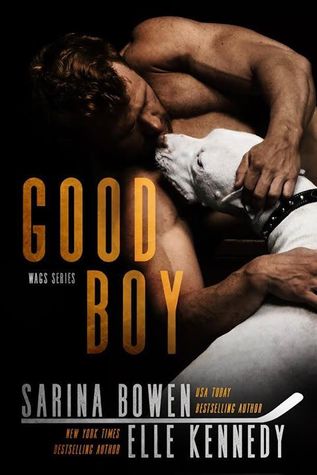 Caution: May cause accidental aspiration of tea or coffee. Do not read in a public place where loud laughter is inappropriate. Contains hot but hilarious hockey players, puppy cuddling and a snarky pair of underwear.

We were first introduced to Blake and Jess in Us, so I was pretty excited about them getting their own book.  I just knew that I was going to love Blake.

I would definitely say that Blake is one of my all-time favourite characters.  He’s a professional hockey player.  He’s funny (sometimes downright goofy).  He’s loyal and protective of those he loves and cares about.  He’s a good and thoughtful friend. He’s got a super positive outlook. He’s Canadian (his family lives in the same city as I do!).  What’s not to love?!

Jess was a bit of the opposite.  She’s flitted from career to career and believes that her family sees her as a disappointment.  Her focus is on the new direction she wants to take in her life and doesn’t see room in it for anyone (Blake).

Blake never gave up even when Jess gave him an ice-cold shoulder.  He remained positive.  Then, when she needed a little boost, he was there for her giving her all the positive vibes a girl could want.

This writing duo has definitely joined the list of my favourite authors, both individually and collectively.  I look forward to reading more from these two.

You know when you read a book and it just makes you feel good? THIS book did that for me.  It was a fun and sexy read.  No big angsty moments.  Just a sweet and funny love story.  There was no hesitation on my part in giving Good Boy five sweet, hot and delicious caffe lattes.

Note: I received this ARC  in exchange for my honest opinion.

I love to talk about books, hot guys and anything else I need to get off my chest. END_OF_DOCUMENT_TOKEN_TO_BE_REPLACED
This entry was posted on Tuesday, January 31st, 2017 at 1:34 pm and tagged with ARC Review, book, Book Barista, book recommendations, book reviews, Elle Kennedy, Good Boy, Hockey Player Book Boyfriend, Hockey Players, Sarina Bowen, WAGs Series and posted in ARC Review, Book Barista, Elle Kennedy, Sarina Bowen. You can follow any responses to this entry through the RSS 2.0 feed.
« Faces I Love!!!
Cover Reveal: Preppy, Part Three by T.M. Frazier »