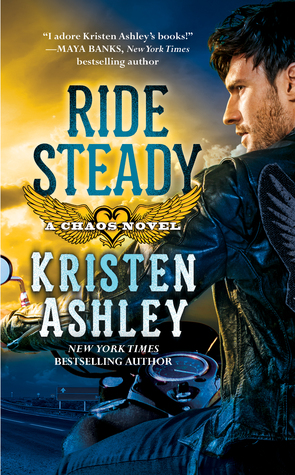 The ride of her life . . .
Once upon a time, Carissa Teodoro believed in happy endings. Money, marriage, motherhood: everything came easy—until she woke up to the ugly truth about her Prince Charming. Now a struggling, single mom and stranded by a flat tire, Carissa’s pondering her mistakes when a vaguely familiar knight rides to her rescue on a ton of horsepower.

Climb on and hold tight . . .
In high school, Carson Steele was a bad boy loner who put Carissa on a pedestal where she stayed far beyond his reach. Today, he’s the hard-bodied biker known only as Joker, and from the way Carissa’s acting, it’s clear she’s falling fast. While catching her is irresistible, knowing what to do with her is a different story. A good girl like Carissa is the least likely fit with the Chaos Motorcycle Club. Too bad holding back is so damned hard. Now, as Joker’s secrets are revealed and an outside threat endangers the club, Joker must decide whether to ride steady with Carissa—or ride away forever . . .

First I need to mention that my book bestie and I were totally squeeeeeing (that’s a word, right?) at getting this ARC from Netgalley.  Kristen Ashley, in my eyes, can do no wrong.  So yes, you’re probably right, this will not really be an objective review.  This is the woman who created my forever book boyfriend, Kane “Tack” Allen and seeing as this series is about HIS motorcycle club I knew I’d see him again in this book and that alone gives this book five of the yummiest most delicious coffees around.

Now that I’ve spewed forth all that is my love for Kristen Ashley and Tack, I will say that I absolutely loved Joker and Carissa.  As is KA’s style, she completely hooks you into these characters and their lives.

Joker endured plenty of abuse as a kid and as soon as he was able to he took off leaving the emotional and physical abuse behind him.  Abandoned by his mother and abused by his father, he still had people who cared for him.  When he returns, he joins Chaos. He makes a name for himself with Ride (Chaos’ car building/designing business) and becomes an integral member of the club.  Eventually he reconnects with those people that cared for him before he left.

Carissa was a popular girl in school but even so never had a mean thing to say about anyone.  Having suffered through some family tragedies she looks forward to being a wife and a mom.  After marrying her high school boyfriend she finds herself in a failed marriage and being a single mom to her son.

One day after her car breaks down, she’s on the side of the road needing some assistance and Joker comes to her rescue.  Joker immediately recognizes the girl he crushed on in high school but Carissa doesn’t recognize him at all.  From there their relationship grows.  Joker is wonderful to her and her son.  Of course, there’s nothing like a woman moving on with another man to make her ex suddenly want her back.  Jerk!!!

As usual, Kristen Ashley brings back some of the characters from other books.  I love how she gives us glimpses of all of our old favourites *cough* Tack *cough*. It’s nice to touch base with them again.

I loved Joker and Carissa (I knew I would!) and give this book five delicious, sweet and satisfying lattes.  As always, I look forward to the next book in the series.