I received an ARC for this from NetGalley and yes, I did a happy dance!!!  The release date is December 9, 2013. 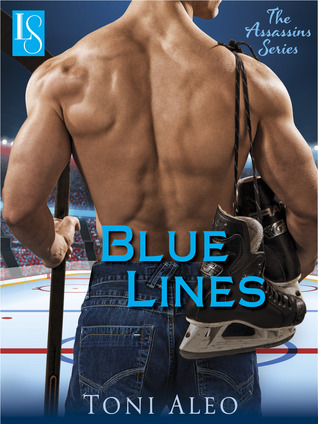 Opposites do more than just attract in Toni Aleo’s latest Nashville Assassins novel about a very bad boy and the good girl he can’t resist.

The instant Piper Allen sees Erik Titov, she wants him—wants his rock-hard body, sure, but the strength and mystery that lies behind that superstar hockey jock demeanor, too. So when he sidles up to her at a bar and slinks his arm around her waist, she’s lost. What follows is the wildest night of her life . . . followed by inevitable heartbreak the next morning. And then, a few weeks later, a very big surprise: two blue lines on a pregnancy test.

Only a check to the head could make Erik fall for a nice girl like Piper. But since their crazy-sexy night together, he’s been trying to forget about her alluring body by falling into bed with every woman in Nashville, and it’s not working. So when Piper shows up at his house with a baby-bomb to drop, it doesn’t take much for Erik to suggest the nuclear option: marriage. While it’s supposed to be all for show, the second they say “I do,” the ice between them starts to melt into sizzling steam.

A couple of months back a friend and I decided to go to a book(s) signing here in Toronto that various authors were attending.  Toni Aleo was one of the authors there.  Since I had Taking Shots (the first book in the Assassins series) on my to read list for a while I decided to give it a go.  WOW!!!  I read all three books in a few days and loved the series.  Then I had to wait for Blue Lines.  Oh the agony!!!!

The first thing I thought about Erik was: WOW! What an ego and what a manwhore.  That said, I still liked him.  What’s not to like?  He’s hot.  He’s a hockey player.  Need I say more?!  He’s also a much better person than he gives himself credit for.  Life experiences have left him feeling undeserving of a good woman’s love.

I loved Piper!!! Despite shedding a lot of tears [I chalk it up to pregnancy hormones], I found her to be incredibly strong.  She really was quite patient with Erik even when he was being a total asshat.  She knew all along that he was a better man than he thought.  I found myself crying along with her on a few occasions.  Yeah yeah yeah.  You all know what a sap I am.

I love this series and am definitely looking forward to more from the Assassins.  I gave this 5 yummy cups of coffee.

I’ve been trying to get to this one for a few weeks now.  Finally I started it last night.

I was very excited to be able to get this ARC.  My review will be posting very soon.

WHAT I’M HOPING TO READ NEXT:

Only For You by Genna Rulon

The synopsis on this one had me intrigued.  I’m not gonna lie.  The cover is beautiful. Looking forward to it.