It’s been almost four years since I had to put my beloved cat of seventeen years down.  I miss him a lot.  I had him longer than I have had my own children.  For a long time, I didn’t even think about getting another cat, which made my husband happy.

Merlin - taken shortly before he passed away. Yes, he was old and crotchety but I loved him

You see, I’ve always been a cat lover. My husband… not so much!  When we got married, I begged and pleaded and hubby caved. We got Merlin!

After Merlin, DH made me promise that we would be pet-free for at least a year.  I had no problem making this promise as I couldn’t even think of replacing Merlin.  [W4R: Awwww, this is sooo sad! ;..(  I need a HEA ASAP!]

As I mentioned before, it’ll be four years at the end of March and now I am seriously wanting another cat.  My problem?  DH is not keen on the idea. [W4R:  Rut-roh!]

These are his claims:

All of his claims are valid.  [W4R:  Is that code word for “silly”?  Cats rule! LOL]  I’m not going to bother denying it.  I have to keep reminding him of the times when Merlin would sense him coming and would be waiting to greet him at the door when he came home from work.  And remind him of the times when Merlin used to cozy up to him on the couch while he watched TV. 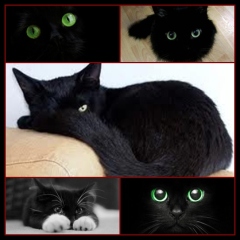 So, my mission is to convince DH that we can have a cat again.  I’ve always liked black cats and would love to get one.  Especially one with blue eyes (as per first-born’s request).

Yes, a black cat with short fur wouldn’t shed as much, or at least you wouldn’t notice it as much on our black clothing.

We (first-born and I) have already picked out a name for our future cat [NOTE: that’s me trying to project positive thoughts to the universe 🙂]   His/her name is going to be Appleton Rumball.  [W4R:  WTF?]  I know, you’re thinking “WTF?!”  [W4R:  Yes, I totally was.. how’d you know that..?]  It’s just one of those things that first-born and I came up with together.  I suggested Rumball and she (loving all things Jamaican) thought of Appleton (as in the Jamaican Rum) and voila! Appleton Rumball.  [W4R:  Again, I say, WTF…. LOL haha…  ]

So what I’ve started doing is texting pics of cute little black kitties to DH throughout the day, with messages attached like:

Could this be Appleton Rumball?

Could *this* be Appleton Rumball?

I’m thinking that if I’m relentless and bombard him with all the cute images he’ll give in eventually.

**Writing4Roses is kind enough to look over my ramblings to make sure I’m dotting all my Is and crossing all my Ts (and to add the odd witty comment every here and there).