The Book Barista Reviews: Back Check by Kelly Jamieson 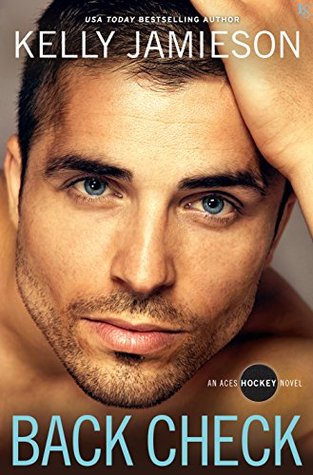 The so-bad-they’re-good alphas of hockey’s Chicago Aces are back in this emotionally charged novel of sex, love, and second chances from the bestselling author of Top Shelf and the Heller Brothers series.

Tanner Bennet hates weddings. They just remind him that he simply isn’t cut out for any kind of healthy, committed relationship—never has been, never will be. After getting rejected by the girl he thought was “the one” all those years ago, he made a huge mistake and married the wrong person. Now that the divorced heartbreaker has reluctantly agreed to be a groomsman for one of his NHL teammates, the last thing he expects is a chance at redemption with the one that got away.

After Marc Dupuis of the Chicago Aces hires wedding planner Katelyn Medford, she discovers that her big break comes with a twist: a reunion with her college sweetheart. The way she dumped Tanner still haunts her. Eight years—and three broken engagements—later, Katelyn knows she’ll never have that kind of innocent, wide-eyed passion again. Still, she and Tanner soon generate enough body heat to burn up the sheets. And even with Tanner’s career with the Aces up in the air, Katelyn’s wondering whether the time is right to let him in for real.

This book has so many things going for it.  The first thing you’ll notice is the amazing cover.  HELLO SEXY MAN WITH THE STUNNING EYES!!!  Then once you dive in, you’ll add a new sexy, hockey player book boyfriend to your list.  And then, who doesn’t love a second chance romance?

This series sucked me in right from the first book.  Kelly Jamieson writes amazing characters.  You’ll love the hockey players and the women who love them.  I thought it would be tough to top Jared and Sidney from the previous book Top Shelf, but this one pretty much tied as my favourite in the series.

Katelyn and Tanner have history, so imagine their mutual surprise when they come across each other again. Katelyn as Marc and Lovey’s wedding planner and Tanner as one of Marc’s groomsmen.  In the past they made choices that required that they each go their separate ways.  Now they keep bumping into each other and their chemistry is unmistakable.  Once again they may be forced to make some tough decisions.  I loved seeing how they came to terms with the love they have for one another.

I really enjoyed this book and it definitely is worthy of five hot and steamy Tim’s (you know, the first one you have in the morning that is oh so satisfying).  As usual I look forward to more in this series.

Whether it’s a clutch goal or a cocktail, nothing beats “top shelf.” In this novel from the bestselling author of the Heller Brothers Hockey series, a fun-loving jock and an ambitious career woman mix business with pleasure.

Not only is Jared Rupp one of the stars of the NHL’s Chicago Aces, he’s also the owner of the Sin Bin, the after-hours hot spot where the whole team hangs out. Lately, Jared can’t take his eyes off the woman he’s hired to give the Bin a more modern feel: a sexy, sophisticated consultant who has carved out a niche updating drink menus. She’s as passionate about her career as Jared is about hockey—and yet he can’t help wondering what kind of cocktail she really wants.

In her line of work, Sidney Frayne is used to guys hitting on her in bars, but Jared gets her hot enough to burst into flames. When he’s wining and dining her, he’s sophisticated as hell; on the rink, he’s a testosterone-fueled powerhouse. Still, Sidney’s bitter divorce taught her to keep her emotions on ice. With her busy schedule—and Jared’s playboy reputation—she’s not sure she’s ready for a fling. Because if she lets Jared into her bed, she just may have to let him into her heart.

A chance encounter and an honest comment brings Sidney and Jared together, at first in a business relationship and then as fun.  Both Jared and Sidney are reluctant to get into a long term relationship but both agree to have some fun together.

I really enjoyed Sidney.  She was a strong, independent woman who had gathered up the pieces of herself after being emotionally destroyed in a previous relationship, and made a new career for herself.  I definitely thought she was a great character.  She also had a fantastic dog.  I’m a sucker for pets as fictional characters.

As for Jared…I loved Jared!  He had been introduced in the previous books in this series so I was happy to see him get his own book.  He was a very sexy (and well dressed) hockey player and bar owner.  He’s an older and wiser player on the Aces team. I must also say that Jared  could very well be the king of great dirty talk. Yes indeed!!!

One of my favourite parts of the book was their first real kiss.  Man oh man was it hot!!!!  I don’t know if it was the kiss itself or if it was the build up to it.  Maybe it was just these characters.

Also, I love the way this author actually puts some hockey in her books.  It’s not that he’s just a hockey player and hockey is mentioned.  She actually writes some exciting hockey action into the story.

Kelly Jamieson once again delivered a great story with great characters (including a lovable dog).  I look forward to more in this series.  I gave Top Shelf five hot, rich and steamy cups of Tim’s Dark Roast coffee. 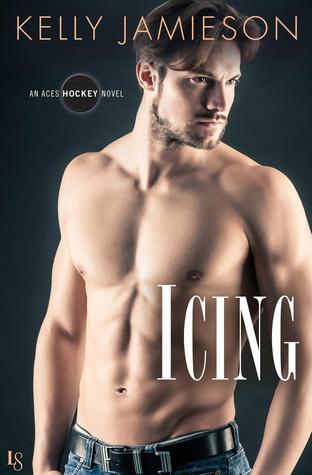 Hailed by Jami Davenport as her “go-to author for hockey romance,” the bestselling author of the Heller Brothers Hockey series sets the ice ablaze with another sexy novel featuring the gorgeous men of the Chicago Aces.

Duncan Armstrong may be an NHL star, but he’s a country boy at heart. His ultimate fantasy is going home with the Stanley Cup, not a gold-digging airhead who aspires to be a trophy wife and nothing more. Newly single and hoping to enjoy a night out with his teammates, he ends up hitting it off with a down-to-earth waitress who’s a complete breath of fresh air—until Duncan learns that she’s a part-time model. He tries to forget about her, but their sizzling chemistry has him coming back for more.

Amber is working hard to put herself through school, and has zero interest in dating a professional athlete. She’s seen firsthand how fame and fortune can mess with their heads—her father’s brilliant football career ended in a firestorm of addiction and infidelity. So Duncan’s attentions immediately have her on the defensive. Still, there’s something different about him. And once she stops trying to freeze him out, irresistible temptation turns into all-consuming passion.

This is my second book by Kelly Jamieson and I really was looking forward to it.  Duncan was an important character in the first book in this series, Major Misconduct, so I was definitely wanting to know his story.

I loved that Duncan was basically a small town boy from Wisconsin that excelled at the game of Hockey.  He still liked the simple things in life, such as spending time at his cabin and working with kids. Coming off a relationship with a model who clearly enjoyed his money, I totally understood his weariness and/or reluctance to date another model.

When he met Amber he liked her a lot but he was totally surprised when at a fundraising function he found out that she wasn’t only a waitress, she was also a model.

Both Duncan and Amber had preconceived ideas of what a model is like and what a professional athlete is like.  Their personal experiences have tainted their views, understandably so.  Throughout the book they both struggle with these preconceptions, although I will say that Duncan is a bit more open minded than Amber.  They had phenomenal chemistry and when they weren’t worried about all that crap in their past they were really good together.

I really enjoyed this book and would highly recommend this book and series. I gave Icing four creamy and delicious Iced Caps.  I definitely hope there will be more in this series as I love Kelly Jamieson’s writing and who doesn’t love a great hockey player book boyfriend?

Note:  I received this ARC from NetGalley in exchange for my honest opinion. 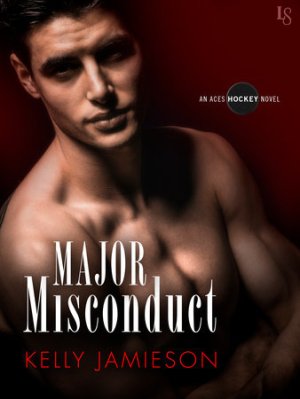 In Kelly Jamieson’s seductive new Chicago Aces romance—perfect for readers of Sawyer Bennett and Toni Aleo—a fun-loving free spirit tempts an uptight hockey star into opening himself up to love.

As the captain of the Chicago Aces, Marc Dupuis is all business. The apartment he shares with his teammate and best friend, Duncan, is a refuge from the pressures of fame. But when the sexiest woman he’s ever seen interrupts his early morning coffee wearing only a skimpy cami and matching panties, Marc can’t exactly say he minds. Their chemistry is off the charts. Unfortunately, this girl’s no random puck bunny. She’s Duncan’s little sister—and she’s moving in.

Lovey Armstrong could stare at Marc’s chiseled abs and listen to his French-Canadian accent all day. She just has no idea what’s going on inside his head: When he’s not charming her pants off, Marc makes a Zamboni machine seem warm and cuddly. Lovey knows the team’s bro code says no messing with sisters, but all these mixed messages are hard on a girl’s self-esteem—especially since she’s finally getting her new life together in Chicago. She decides he’s worth another shot . . . because if anyone can melt the ice around Marc’s heart, it’s Lovey.

Most of you know I’m a sucker for a good hockey romance.  So I was pretty excited to get this one from Netgalley. This is my first Kelly Jamieson book and I’m happy to report that I am now looking forward to more in this series.
I enjoyed everything about this book.  I really liked Lovey and Marc.  Lovey is all fun loving and light and airy and Marc is all Mr. Serious and very responsible.  Of course, the attraction between them is instant but that pesky rule about not messing with your friend/team mate’s sister kind of gets in the way.
This book was sexy and flirty and a quick read for me.  Aside from the main characters, I also liked Duncan, Lovey’s brother, and Jenna, Lovey’s best friend.  The other Aces players that popped in here and there were also pretty likable.  Hopefully we’ll see more of them all in the next books in the series.
As I mentioned before, this was a fun and sexy read for me.  I gave Major Misconduct four steaming cups of java and I’m definitely cheering on the Aces in future books in the series.

Kelly Jamieson is the author of more than thirty contemporary romance novels. She’s a married mother of two who lives a very ordinary life outside of her imagination. She likes coffee (black), wine (mostly white), and shoes (high!). She also loves watching hockey. 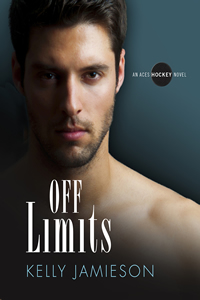