When adrenaline runs high, so does the force of desire…

For Shay Appleton, it’s love at first sight when a gorgeous stray dog is brought into the animal shelter where she works. She just knows he’ll make a terrific watch dog—and with an abusive ex who won’t let go, she needs all the protection she can get. But Shay never suspected that her new pet is actually a trained police K-9 named Bogart—until Bogart’s even more gorgeous, human partner shows up on her doorstep.

Officer James Cannon is one tall, strong alpha male who’s convinced that Shay stole his dog. But once he gets closer to the suspect, he realizes that this stubborn, independent woman not only needs a guard dog, she needs James as well. It seems that someone from her past is stalking her, and threatening her life. When danger meets desire, will James risk his career and his best friend…to protect the woman who’s stolen his heart?

I received an ARC of this book from NetGalley in exchange for my honest opinion. This is book one in the series K-9 Rescue.

I’m not gonna lie.  The cover definitely caught my attention – not just with the hot guy but the dog too.

I totally loved James! He’s hot. He’s truly a nice guy and he’s a cop (which automatically increases the hotness level). In tracking down his missing K-9 partner, Bogart, he meets Shay. He’s drawn to her and their chemistry sizzles.  Add to this the fact that Bogart likes Shay too.  He ends up trying to protect her from crazy stuff that keeps happening to her.

Shay Appleton has got to be one of the toughest, strongest females I’ve ever met in any book.  She’s endured so much but she keeps on going.  I’ll admit that at one point in this book I felt so bad for her and I didn’t know how it would be possible for everything to turn out positively for her.

I enjoyed this book a lot and gave it five delicious cups of coffee and I’ll throw in some doughnuts too (I couldn’t help it.  The cop thing compelled me to throw in the doughnuts. Yes, I’m a nerd.) 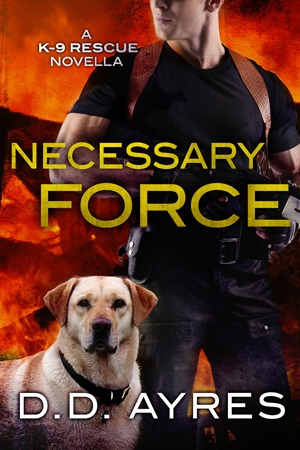 It was supposed to be a sexy calendar shoot to raise money for K-9 service dogs. Photographer Georgie Flynn never expected to break all her personal rules and jump into bed with one of the hunky men posing. And after their steamy night together, she certainly never expected to see him again…despite their powerful connection.

When she’s targeted by a stalker and possible bomber, Georgie finds that her gorgeous one-night stand is the only one who can help.

Brad Lawson, an FBI operative, and his K-9 bomb sniffing partner are assigned to protect the pretty photographer–and this time, he’s determined to keep things professional. He just didn’t count on their explosive connection rekindling. But with a deadly threat on the horizon, will he be able to keep his body’s demands in check and complete his mission?

I’ll be honest.  I don’t usually prefer to read novellas but I so enjoyed Irresistible Force  that I decided to buy Necessary Force and give it a shot.

I loved it!  It was a fast read. Even though it is a novella there was suspense.  I was so curious as to what would happen.  Lucky for Georgie, Brad (hunky FBI agent) and Zander his K-9 partner were on the case and helped her with the crazy stalker and possible bomber.  I was totally surprised by the outcome.  Good job D.D. Ayres!!!

I gave this four yummy coffees (would’ve been five if it was longer) and I’ll throw in some doggie treats for Zander.

A veteran author of romance and women’s fiction, D.D. Ayres is new to Romantic Suspense. She believes the lure of romance is always the human connection. Put that connection in physical jeopardy, and and we learn a bit moreabout who we really are.

With her K-9 Rescue series, D.D. hopes you will enjoy her sexy, suspenseful portrayals of K-9 teams at their best.

D.D. lives in Texas with her husband and a soft-coated Wheaten terrier named Zoe.