The Book Barista Reviews: Rocked by Love by Christine Warren 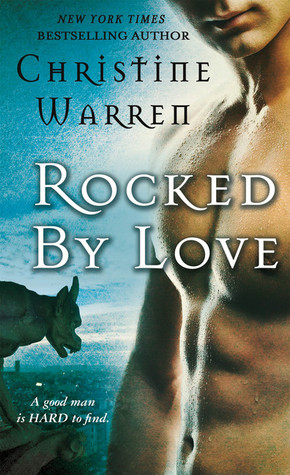 Bestselling author Christine Warren returns to the secret world of gargoyles-where legends come alive, and lovers are caught between a rock and a hard place…

Kylie Kramer knows that she’s putting her life in danger when she decides to investigate her friend’s mysterious death. What she doesn’t know is that she’s being watched over by a powerful protector. A legend in stone who has defended humanity throughout the ages. A rock-hard savior who swoops down from the sky, scoops Kylie into his impossibly strong arms, and draws her into a world that no mortal woman can imagine…or resist.

As the strongest of the gargoyles, Dag is sworn to destroy the demons that threaten Kylie’s world before returning to his stony slumber. But the burning desire she ignites in him is even harder to fight-an all-consuming force that, once unleashed, can never be tamed. As their passion grows, so do the ranks of a demonic army plotting to take over the earth. When the ultimate battle begins, Dag and Kylie must face some demons of their own-to carve out a love that’s stronger than time…

This is the fourth book in the Gargoyles series.  I’ve been patiently waiting for this to be available.  As I’ve mentioned before, I LOVE GARGOYLES!!!  I especially love Christine Warren’s Gargoyles.  They are total sexy alpha males.

In my opinion, you definitely need to read the other books in this series before this one.  Each book adds a layer to the battle that will eventually take place.  The author has built a world where evil darkness is so close at hand.  Only the Guardians and their Wardens can save humanity.  Each of the books has it’s own battle with the darkness but each one escalates in intensity.

I really enjoyed Dag and Kylie.  Dag, of course, is sexy and like the other Guardians takes a while to adjust to the lingo of this day and age.  Couple that with Kylie’s Yiddish and it’s pretty funny.  I learned a lot of Yiddish from this book and I loved it.

It was nice to see the characters from the other books again but my favourite secondary character was King David the cat.  He was a pretty awesome cat.  Basically a stray that comes in for frequent visits and has his own chair.  He also was quite the hero in one scene.

This series has been pretty steady and enjoyable.  I gave Rocked by Love four cups of strong and sweet espresso.  I definitely look forward to what comes next in this series.

The Book Barista Reviews: Hard As A Rock by Christine Warren

Title:  Hard as a Rock 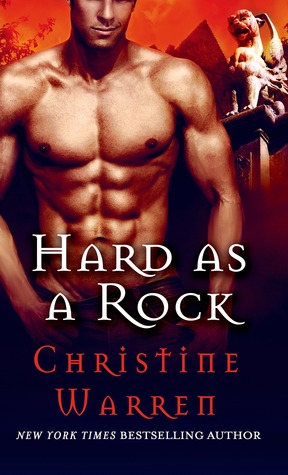 Wynn Powe comes from a long line of powerful women, and an equally long line of Wardens. Unfortunately, Wardens all over have gone missing–her brother included–just when the threat from the Order of Eternal Darkness has begun to rise. Now more than ever, humanity needs Guardians to stand between them and the ultimate evil, so Wynn has returned to Chicago to locate a Guardian of her own. But the Order of Eternal Darkness has beat her to the punch, and the statue she’s come to investigate has been blown to smithereens. An elusive enemy is on her trail…and this time, she’s on her own. It’s up to her, a woman with no training as a Warden, to summon a new Guardian to the fight.

HARD AS A ROCK

Enter Knox. He may be a newly summoned Guardian, but he possesses all the skills and memories of his race…along with drop-dead, expertly-chiseled good looks. Bound to Wynn as his Warden, Knox vows to learn the truth about the destroyed Guardian–and protect Wynn at all costs. But he never could have imagined the fierce attraction that has taken hold of him, body and soul. Is his desire for Wynn worth the risk of being destroyed by the Order? The only thing he knows for sure is that he won’t go down without a fight. Nor will he pass up a night of pure blind passion. . .

I’ve been a big fan of this series since I heard about it.  I lurve gargoyles!!! I keep looking forward to the next book.  Although each book tells its own story I recommend reading this series in order.

We met Wynn in the second book, Stone Cold Lover.  I liked her then so I was happy to get to know more about her in this book.  Once again a Gargoyle/Guardian has been summoned to help fight the war against the Order of Eternal Darkness (nasty evil thing this Order- looking for world domination).  Sadly, they no longer have the knowledge and help of the Guild (the institution set up to combat the evil) in the fight against the Order. So they have to work together, with the help of their friends from the other books, to try to defeat the Order and prevent the evil from infiltrating.  I know this sounds very complicated but trust me, when you read the books it will all make sense and you will understand.

I loved that there were surprises that I did not see coming.  I thought I had it figured out but NO!  I was definitely side-swiped by what happened.

I gave Hard as a Rock four strong and delicious cups of coffee.  I can’t wait for the next book int he series!

Born and raised in coastal New England, Christine Warren lived in the South and the Mid-Atlantic before hopping to the other side of the country to take up the life of a transplant in the Pacific Northwest. She completely bypassed those states in the middle due to her landlocking phobia. Hmm, need to research a scientific term for that…

When not scrambling frantically to complete her latest writing project, Christine spends most of her time as a crazy animal lady, hanging out with her dog Levi (he’s the one with the hair) and pretending to train him to have some manners. She also hangs out with her horse, Cal—a thoroughbred with a craving for strawberry licorice twists—her goddog, Merlin; and her best friend, fellow author Hannah Murray. In addition to playing with her pets, Christine’s hobbies include identifying dog breeds from photos of their underbellies, appreciating fine and not-so-fine wines, shopping for the perfect pair of Christian Louboutin shoes, and most of all reading things someone else had to agonize over. 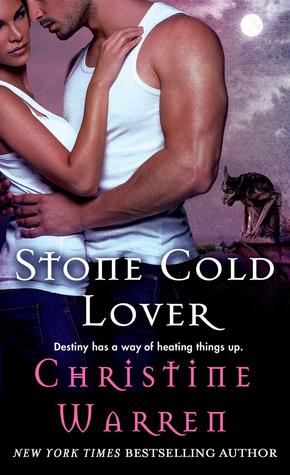 A prominent art restorer, Felicity is more than game to help a friend track down an obscure statue in Montreal. But when “Fil” finds it, she’s taken by surprise at how drawn she is to this statue. Attracted to it in a way a girl shouldn’t lust for a stone gargoyle, she revisits it at night, longing to feel its embrace. Little does Fil know, her desire for this stone cold beast is about to heat up a notch.

Locked in stone for centuries, Spar has slept, waiting for when a human would need him. When he is awoken, Spar is taken aback to find that a human female needs his help. A very sexy woman who’s about to be the victim of a cultist attack. Saving and leaving her should be no problem. But as more questions arise, Spar knows that he cannot rest until Fil is safe in his arms.

I received an ARC from NetGalley in exchange for my honest opinion.  After having read the first book in the series, Heart of Stone, I was excited to get this.

Let me just start by saying that I love gargoyles! I used to love the cartoon Gargoyles. Yes, it’s true…I was a grown woman who watched the show religiously. Certainly you don’t have a problem with this. Do you?

Having said that, I was super excited when I heard about this series.  I immediately got the first book and devoured it. After that, I was ready for Fil and Spar.

Fil is an art restorer who unknowingly awakens the Guardian Spar.  She’s a strong, stubborn woman thrown into what I’d call a nasty situation with the Eternal Order of Darkness. She’s drawn to Spar but is reluctant to let it flourish into something more.

Spar on the other hand is quite certain about what he’s feeling for Felicity and I think at times he’s a bit confounded by her actions and comments.  Luckily for her, he’s somewhat patient and is not easily dissuaded.

I really enjoyed this and am looking forward to the next book in the series. (March seems like such a long time away.) I give this four strong and bold espressos.

Born and raised in coastal New England, Christine Warren lived in the South and the Mid-Atlantic before hopping to the other side of the country to take up the life of a transplant in the Pacific Northwest. She completely bypassed those states in the middle due to her landlocking phobia. Hmm, need to research a scientific term for that…

When not scrambling frantically to complete her latest writing project, Christine spends most of her time as a crazy animal lady, hanging out with her dog Levi (he’s the one with the hair) and pretending to train him to have some manners. She also hangs out with her horse, Cal—a thoroughbred with a craving for strawberry licorice twists—her goddog, Merlin; and her best friend, fellow author Hannah Murray. In addition to playing with her pets, Christine’s hobbies include identifying dog breeds from photos of their underbellies, appreciating fine and not-so-fine wines, shopping for the perfect pair of Christian Louboutin shoes, and most of all reading things someone else had to agonize over. 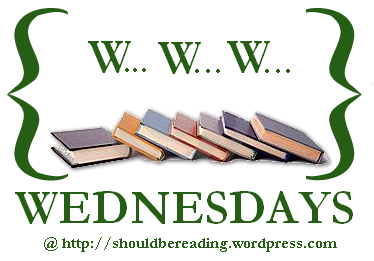 What I am currently reading:

Taming the Storm by Samantha Towle

This is the third book in The Storm series.  I haven’t been able to put it down.  I’m really loving Lyla and Tom.   The other two books in the series were so good. I had no doubt I’d love this book.  At the rate I’m going, I’ll be done this book today.

Heart of Stone by Christine Warren

This book was a total surprise to me.  I found out about it after being offered an ARC of the second book in the series.  The concept of Gargoyles and romance TOGETHER got me excited (I was a big fan of the Gargoyles cartoon).  I decided to have a look at this.  I LOVED IT!!! I’m looking forward to reading book two in the series. Every now and then a good book comes along that reminds me that I do enjoy paranormal romance.  This is definitely one of those books.

If you’ve read and enjoyed Tangled then you have to know that you’ll love this one.  This is about Drew and Kate’s friends Matthew and Dee.  I love Emma Chase’s writing style and she is writes a man’s point of view like no one else.  I really enjoyed this book and will be posting my opinion on it next week.

At Peace by Kristen Ashley

I LOVE KRISTEN ASHLEY!!! There I said it! If you know me, you also know this is not much of a revelation.  This is book two in The Burg Series. For some strange and bizarre reason, I’ve only read the first book. I don’t know why I haven’t read this whole series yet.  Yesterday, the fifth book in this series was released and it inspired me to get to reading this.

There you have my W…W…W… for this week.  Now tell me what yours are.  You know…SHARING IS CARING!