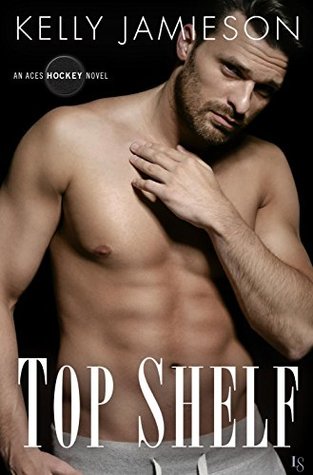 Whether it’s a clutch goal or a cocktail, nothing beats “top shelf.” In this novel from the bestselling author of the Heller Brothers Hockey series, a fun-loving jock and an ambitious career woman mix business with pleasure.

Not only is Jared Rupp one of the stars of the NHL’s Chicago Aces, he’s also the owner of the Sin Bin, the after-hours hot spot where the whole team hangs out. Lately, Jared can’t take his eyes off the woman he’s hired to give the Bin a more modern feel: a sexy, sophisticated consultant who has carved out a niche updating drink menus. She’s as passionate about her career as Jared is about hockey—and yet he can’t help wondering what kind of cocktail she really wants.

In her line of work, Sidney Frayne is used to guys hitting on her in bars, but Jared gets her hot enough to burst into flames. When he’s wining and dining her, he’s sophisticated as hell; on the rink, he’s a testosterone-fueled powerhouse. Still, Sidney’s bitter divorce taught her to keep her emotions on ice. With her busy schedule—and Jared’s playboy reputation—she’s not sure she’s ready for a fling. Because if she lets Jared into her bed, she just may have to let him into her heart.

A chance encounter and an honest comment brings Sidney and Jared together, at first in a business relationship and then as fun.  Both Jared and Sidney are reluctant to get into a long term relationship but both agree to have some fun together.

I really enjoyed Sidney.  She was a strong, independent woman who had gathered up the pieces of herself after being emotionally destroyed in a previous relationship, and made a new career for herself.  I definitely thought she was a great character.  She also had a fantastic dog.  I’m a sucker for pets as fictional characters.

As for Jared…I loved Jared!  He had been introduced in the previous books in this series so I was happy to see him get his own book.  He was a very sexy (and well dressed) hockey player and bar owner.  He’s an older and wiser player on the Aces team. I must also say that Jared  could very well be the king of great dirty talk. Yes indeed!!!

One of my favourite parts of the book was their first real kiss.  Man oh man was it hot!!!!  I don’t know if it was the kiss itself or if it was the build up to it.  Maybe it was just these characters.

Also, I love the way this author actually puts some hockey in her books.  It’s not that he’s just a hockey player and hockey is mentioned.  She actually writes some exciting hockey action into the story.

Kelly Jamieson once again delivered a great story with great characters (including a lovable dog).  I look forward to more in this series.  I gave Top Shelf five hot, rich and steamy cups of Tim’s Dark Roast coffee.